Bolton chairman Phil Gartside tried to convince everyone that they the club were better off shot of Sam Allardyce last May: “If you look at his credentials to what Sam’s were when he joined they are better,” he said of new manager Sammy Lee. In October, after sacking Lee he said: “This has been a difficult decision for all parties but we have agreed the time is right.” Already under pressure, Gartside could not have gone more against the grain when he appointed Gary Megson as the new manager – unless perhaps he had lured Bryan Robson from Sheffield United (as of time of writing, natch). “We feel Gary is the right man to take Bolton forward,” Gartside said rather unconvincingly.

Anyway they’ve won a handful of games in the last two and a half months; not particularly great. But the team have certainly shown more cohesion and pulled out some good results against Man U, Bayern Munich and Birmingham. The UEFA Cup remains a distraction but the likelihood is that Atletico Madrid will be too strong for them in the next round and Megson can set about getting the points needed to stay up. Matthew Taylor was a good buy from Portsmouth during the window

Away to Man U and Chelsea, home to Liverpool and Arsenal. Not a fixture list to inspire confidence. They need to get stuck in and win home games against Man City, West Ham and Sunderland or there could be trouble ahead. I think 3 wins and 4 draws in the last 12 games is all they can hope for.

Roy Keane has hardly broken a sweat despite criticism in his opening season as a Premiership manager. It was never going to be easy for Sunderland but there has to be some disappointment at the performance of expensive signings Kieron Richardson (perpetually injured), Michael Chopra and Paul McShane. Andy Cole has moved on, Dwight Yorke has been horrendous but thankfully Kenwyne Jones has shocked everyone by being largely inspirational up front. The addition of Andy Reid might be the calming influence that Keane’s team needs.

Sunderland have a soft center which means they are hard to predict. On their day they can give as good as anyone but often they have been narrowly beaten and, occasionally, humiliated. There is definitely three wins in them, possibly another at Newcastle if Keegan’s side are still struggling by then. They should also pull out a shock result against Everton, Chelsea or Arsenal whom they all have at home. Four wins, three draws.

Poor old Newcastle. When I look at their team I see Given, Carr, Butt, Emre, Barton, Martins, Owen, Duff, Smith, Viduka, Geremi and even decent talents like N’Zogbia, Ameobi and Faye. So why, oh why, are they so bad? They are really awful, it’s a rotting core. It would really have taken someone like Gerrard Houllier (say what you like about him, he’s experienced and able to get a team a decent level), Jose Mourinho or even Didier Deschamps to galvanise the troops. Keegan doesn’t convince at all and his lack of transfer window activity showed either a mental block or blind optimism. They are in trouble and it’s hard to see where the next win is coming from.

Not the easiest collection of games either. Failing to pick up any points in home games to Man U or Blackburn leaves them unlikely to get more than a single point from their first four games. For their sake you have to hope they will beat free-falling Blackburn, struggling Fulham and Reading and go in to the North East derby on 37 points. I think points from their last three games are unlikely so let’s say three wins and perhaps three draws and see if it’s enough.

Part of me thinks Middlesbrough‘s Gareth Southgate hasn’t a clue, the other half thinks he could be the next David Moyes such is the Jekyll and Hyde nature of his club. It’s obvious that scoring goals has been their problem this season: their top league scorers are Tuncay and Downing with 4 each. Aliadiere suddenly became brilliant against Fulham last weekend – in the wake of ‘Boro spending £12m on Afonso Alves, coincidentally.

I think they are a decent side who, if he keeps the squad together for next season, will comfortably finish mid-table. They have enough winnable games here to stay up and if Alvez finds his groove quickly enough a return of 6 goals in 12 games will be a good start for him.

Juande Ramos must enjoy a challenege as he took over Martin Jol’s sinking Tottenham when they were in the relegation zone. But although performances have been erratic, he has guided them to 12 wins in 20 games in charge. They are unlikely to make Europe unless they win most of their games but relegation is not a concern for a talented squad in need of a good midfielder. Jenas has improved ever so slightly this season but I’d be surprised if Ramos sees him as the number one option next year.

Actually all of their remaining games are winnable but their form and morale could depend on winning the League Cup in a few weeks and how they fair in the UEFA Cup – a continued run would see string sides likely to take the field in several league games. But six wins and three draws are very possible.

So there we have it – so who’s staying up, and who’s going down… 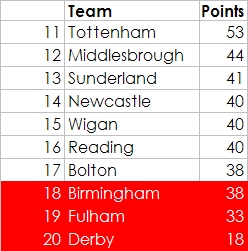 Not much contest at the bottom where Derby and Fulham just don’t have the squad to compete with their relegation rivals. Birmingham and Bolton have little to choose between them but they could be seperated by as little as a late goal or even goal difference. Reading, Wigan and Newcastle will hover nervously, even on the last day, but essentially survive.

Will the respective managers stay at the relegated clubs? Will Ian Dowie take over at all of them in one season?

One can only dream.