Continuation from Part 1, Part 2 and Part 3.

Ooh, it’s not going to be pretty this year. Tottenham are doomed! At least that’s what I’m reading. Spurs sacked the manager who had brought them their most success in 50 years, hired a manager who lasted a wet weekend in west London, sold all their strikers apart from the “diminutive” Jermaine Defoe, sent inspirational kneeless miracle Ledley King to the knackers yard and refuse to sell a mop-headed Croatian “schemer” who would rather spend weekends in the stands with David Bentley and Jermain Jenas (please!) than give Daniel Levy another 90 minutes of half-arsed inventiveness. If you’re a Spurs fan at the moment you’re either apathetic or apoplectic (you can’t be both – it’s a biological impossibility). Levy will probably make a couple of panic signings at four minutes to closing that will make Oyvind Leonhardsen and Roman Pavlyuchenko look like wily business. But when all is taken in to account this could be an almighty mess in N17. 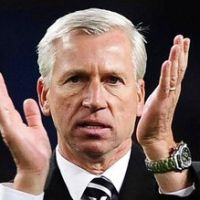 I think everyone is waiting for the Alan Pardew rehabilitation to fall apart and for him to return to the joke status that saw him kicked out of West Ham, Charlton and Southampton. Actually his record at Southampton was quite good and it was reportedly internal conflicts that led to his dismissal. Regardless of his perceived abilities you can’t deny that Pardew has played his part in turning Newcastle in to a relatively good Premier League side. He’s not spent a lot of money and the likes of Hatem Ben Arfa, Papiss Cisse, Demba Ba, Cheick Tiote and Yohan Cabaye have proven to be excellent Premier League players. Jonás Gutiérrez and Fabricio Coloccini have also turned their careers around under Pardew although he has not repeated the same trick with Xisco. Yes, he’s still there. Newcastle will do well this season although they are more likely to hover between 6th and 10th.

Small squad and all that Everton have, they have (so far) managed to hold on to key players. Yes, Jack Rodwell has left but bagging 15 million pounds for a player who wasn’t always in the team is not bad business and Tim Cahill’s powers were waning so it was a good time for him to move on. Replacing Tim Cahill is former Rangers midfielder Steven Naismith who joins former Ibrox man Nikica Jelavic – and scorer of 9 goals in 13 games last season – at the club. Keeping Phil Jagielka, Leighton Baines and Marouane Fellaini were positives too and if they stay relatively clear of injury, this is one of the most impressive teams outside of the top four.

Most of what I’m reading from Chelsea fans online is that everything is going to be fine once the season starts and we (people who are not Chelsea fans) should not worry. Well obviously we’re not worried but you know how condescension works. Maybe Chelsea fans should feel a little insecure about their position this year though. Roberto Di Matteo doesn’t have the glamour that Abramovich wants and if Pep Guardiola agreed to become Chelsea manager next month, Di Matteo would be gone. There’s an unconvincing air about the Italian in spite of the trophies and the respectable win percentage. Aside from that, there are questions to be asked about the recruitment policy. The back four needed some investment but 60 million pounds was spent on the attacking midfield trio of Marko Marin, Eden Hazard and Oscar instead. With Juan Mata, Ramires and (some would argue) Frank Lampard deserving of places in the first XI, you have to wonder how Di Matteo can keep all these midfielders happy. And with only Torres and Daniel Sturridge as out-and-out strikers, is Abramovich – sorry I meant Di Matteo – looking to mimic Spain’s 4-6-0 formation? And what happens to Essien, Mikel, Malouda, Merieles, Sturridge, Benayoun and whoever else is omitted regularly? It just seems bloated and out of control at Chelsea right now and that’s why I wonder if the project might blow up in their face a little.

Part 5 to be posted later tonight.