The fingers may point accusingly at Michael Dawson following his fifteen minute horror performance against Fulham this afternoon.

But the seeds for the 0-4 thrashing (and the margin of victory was harsh on Fulham) were sown by Harry Redknapp’s game plan.  On paper the Spurs personnel looked strong – only Sandro has lacked playing time this season – but they were set 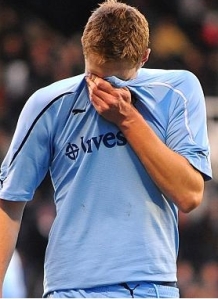 up in a way that ensured key players had minimal impact.

It was a bad day to experiment with playing a right-winger on the left (Aaron Lennon), a ‘second striker’ on the right (van der Vaart) and Steven Pienaar (5′ 7″) alongside Luka Modric (5’8″) in the middle, supporting lone striker Jermain Defoe (5’7″).  It was like Redknapp used “Ask to Pick” on Football Manager and selected the groundsman’s assistant from a drop down list.

It was also a bad day for Fulham to come over all Barcelona; playing at a high-tempo and pressing high up the pitch.

And it was a completely inappropriate time for Tottenham to start knocking the ball around their own half, looking to build from the back but only conspiring to lose possession almost every time.  The game plan looked to be set around giving the ball to Modric 30 yards out, having him draw Fulham up the pitch while attempting to feed the midfielders, with full backs offering support on the overlap.  The truth is it never looked like working with Lennon and van der Vaart looking uncomfortable and Fulham easily winning back the ball in midfield.

There was something deeply unsettling about the attitude of the Spurs players from the off.  If the FA Cup is supposed to be undergoing a revival this year no one told the team in the uninspiring powder-blue kit.  They were languid, lacking urgency and, save for ten minutes at the beginning of the second half, completely outplayed.

We often see struggling teams raise their game (Wolves and West Ham over Christmas and New Year for example) only for them to crash to a thumping defeat the next week.  But Fulham look a very nice outfit indeed with Clint Dempsey and Moussa Dembélé putting in stellar performances alongside battle-hardened veterans like Danny Murphy and the impressive Damien Duff.  Tottenham had no answer and looked as poor and clueless as they did at the very depths of Juande Ramos and Martin Jol’s reigns.

Redknapp bemoaned the lack of movement in the transfer market in a post-match interview, using that resigned tone of voice that connects with the common man (“Nah, we ain’t got nuffin’ goin’ on”).  There’s urgency about the next 24 hours now as Robbie Keane has moved on loan to the Hammers so a new striker has become a priority – especially given the dire goal-scoring form of Peter Crouch and Defoe.  Reports suggest that Atlético Madrid have rejected a staggering £38.5m bid from Spurs for Sergio Agüero while Newcastle last week rejected a pretty outrageous £23m bid for Andy Carroll (something tells me they will regret not getting shot of Carroll while he’s in vogue).

And with the injuries and suspensions piling up in defence, Redknapp may try again for Phil Neville at Everton.  Or he might go one step further and giver Vedran Corluka a game?  You think?  An interesting 24 hours ahead in the transfer market tomorrow.