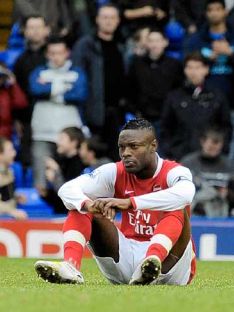 I’m usually quite grounded when it comes to the tribal nature of football.  Crossing the Merseyside divide, traversing the North London battle lines or exchanging colours in Glasgow will usually earn you abuse from your former employer’s fans as well as a proportion of your new supporters.

As a Tottenham fan, having a former Arsenal player at White Hart Lane should be something relatively satisfying rather than something to get upset about.  William Gallas signed a one year deal this weekend with the greatest fear not being that he used to wear the red of Arsenal or blue of Chelsea but more that the 33 year old is over the hill and of questionable character.

The comparisons have been drawn to when Sol Campbell swapped London white for Arsenal red in 2001 but the two situations are almost polar opposite.  Campbell – 26 at the time of his move – spent the months leading up to his defection declaring that he would stay at Spurs and would never play for Arsenal.  Almost a decade on Campbell is still a reviled figure (perhaps the only way of removing the albatross now would be to rejoin Tottenham – as Teddy Sheringham and Robbie Keane would tell him).

Gallas is 33 and did not engineer a move to a rival in the same way that Campbell did.  He’s been a free agent for a while and the move is probably born out of convenience, the possibility of Champions League football, and a healthy contract.  The transfer is short-term and may not last beyond next summer.  Premier league-chasing Arsenal losing a dispensable player like Gallas is nowhere near comparable to a struggling Tottenham side losing their best player in 2001.

Thirty-three year old William Gallas has scowled and stomped his way through his English career.  After a solid career at Stamford Bridge he was left to furiously deny Chelsea’s accusation that he threatened to score own goals if he was refused a move to Arsenal in 2006.  It was hard to believe that an organisation of Chelsea’s standing would lie about something like that, a charge more believable when Gallas’ Gallic temperament is considered.  At Arsenal he courted further controversy by engaging in an on-pitch sit-down protest at the end of a 2-2 draw with Birmingham and in 2008 he was stripped of the Arsenal captaincy after criticising his younger team-mates.  Both clubs have also apparently baulked at his respective contract demands which led to him moving on in both cases.

So with Gallas’ temperament, loyalty, and current footballing ability under the microscope what about this whole “used to play for the Arsenal” thing?

Harry Redknapp admirably crushes this hang up in his own inimitable style:

It’s all cobblers. What’s he done? It’s not the Yorkshire Ripper I’m signing, is it? He’s a footballer, he plays football.

One thought on “Gallas is not a serial killer”