A Smidgen of Credit for ‘Arry 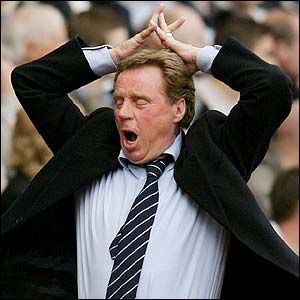 A smidgen of credit for ‘Arry

Yeah I was f’n and blindin’ ‘Arry three months ago.  Deservedly so, I think.  Now, Spurs are well clear of relegation and a point off seventh place and a place in Europe so I look somewhat “wrong”.  Right?

Well, not quite.  I did say at the end of the piece that Spurs “should stay up this year” albeit I didn’t think it would be very clear-cut (and until we hit 38 points it probably wasn’t).

With regard to his signings, Wilson Palacios has definitely exceeded my expectations.  He’s not the finished article but he’s certainly helped shore up a midfield where previously Jermaine Jenas and Didier Zokora had failed to perform.  Robbie Keane has been average at best although he seems to bring a zip and character to the team that wasn’t being provided by Bent or Pavlyuchenko.

Jermain Defoe, I predict, will head off again in the next season or two, maybe after ‘Arry has left.  I find it unlikely that he’ll play with Keane much next season and if Bent and Pav move on then Peter Crouch might be making his Spurs return.  Crouch is fine but I am hoping that we maybe get someone a bit more “travelled” like John Carew or even Jo.

Credit to Redknapp, he’s done well, far better than I thought.  I still don’t like him but you don’t have to like your manager I suppose.

Apparently.  His ineffectual performances recently for Man U and his lazy missed-penalty against Everton in the FA Cup semi-finals have led to a tirade of abuse from disgruntled Reds fans.  First point, why Man U fans give a rats ass about the FA Cup (or indeed the League Cup) is beyond me.  Surely, after where they’ve been, it’s the equivalent of bagging a minger after a string of supermodels.

But you’d also think they’d never seen Berbatov play.  Absolute genius as he could be for Tottenham, around half his performances involved him sulking around the pitch and gesturing angrily at the rubbish rabble he was unfortunate enough to be paid £40k a week to play with.  Berbatov will only do it half the time – that’s the way he is.

Unfortunately for Berbs things get a bit tougher at the top and after engineering a move to “realise his Champions League dream” he now has to deal with the fact that people won’t be happy when he faffs about 50% of the time like he couldn’t give a shite.

You reap what you sow – and when it comes down to it he might still end up with a Premier League/Champions League double.

Wenger and his young players

After a rather demented display against Chelsea in the FA Cup semi-final, Arsenal reserve goalkeeper Lukasz Fabianski was defended by loyal manager Arsene Wenger who said: “I just want to see him recover because I firmly believe he will be one of the best goalkeepers in the world.”

Although unfairly criticised (by Setanta commentators) for the first goal (an acute finish that went through the defender’s legs) there’s no doubt that the Polish keeper was badly caught out for Chelsea’s winner as well as looking all at sea on at least two other occasions.

There’s supporting your players and then there is saying something that’s patently unrealistic.  If he made a reasonable statement about Fabianski along the lines of him being a very good young keeper who has yet to reach his prime, I could have bought that.  But declaring that he will be one of the best in the world?  Really?

Wenger really does put a lot of faith in players who have let him down all too often.  Diaby, Denilson, Djourou and Eboué have not impressed me consistently when I’ve seen them.  There’s a reason I don’t include the likes of Clichy, Sagna, Fàbregas, Walcott and – to a degree – Song.  These players have performed.

I know that every season Wenger expects it all to gel and for his young players to become the new next generation that sweeps all before them.  But as every trophyless season passes, more of his established stars seem to head for pastures new.  There is a real risk that Fàbregas could be next this summer if Arsenal don’t at least reach the Champions League final.

Some love for Newcastle

When I mentioned to some fellow Spurs supporters today that I would not like to see Newcastle relegated due to the fact they’re a bit more interesting than a side like Stoke I was met with relative derision.  The point was made that their fans are cocky (what fans aren’t?) and that it’s always fun to see a big club who have blown a lot of money get relegated.

Maybe I’m too empathetic in my advancing years but – and I don’t mean to pick on Stoke here – I would find games with Newcastle to be far more glamorous and involving than those involving the Potters or whatever.  That’s not to say I wanted Stoke to go down (even though I did tip them for rock bottom) as I admire what they’ve done and it’s a terrific achievement (substitute any of the less glamorous teams for the basis of this discussion if you like).

I think the real truth of it is that I see the likes of Newcastle, Villa, Man City and Tottenham to be all cut from the same cloth – big clubs who brim with potential but excel at underachievement.  Maybe in my mind I’m thinking that if it were Tottenham in Newcastle’s position (and it could very well have been given that – apparently – we only had 2 points after 8 games*) I would like to have seen “fans of football” extend a warm hand of encouragement in our battle to stay up.

Given that most football fans are footballing misanthropics (myself included) I guess that’s not very likely.

* reproduced with the (assumed) kind permission of H Redknapp.